My brother has decided his office is really his office, not a server room. As a result, our website hosting has been moved to go daddy DOT com.

You should be able to see the amsden DOT net page there with no problems. Now to find the time to update that old webpage! 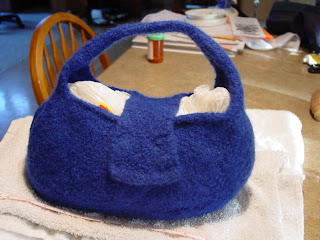 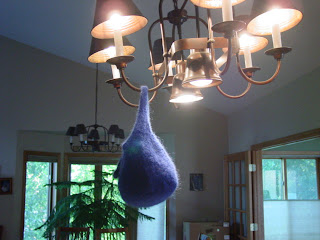 I went to do laundry last night and discovered that our front loading washing machine had decided it didn't want to lock the door and spin out on high anymore. Looking on the bright side, I decided it was the perfect time to get Amanda's Squatty Sidekick felted since I could now open the door whenever I wanted and it would never spin a silly crease in the side.

Here's the results. It is about 11 1/2 inches wide by 5 1/2 inches high and then 4 1/2 inches deep. I am overall pleased with it, I will definitely make another one and plan out the decreases a little better if I double the depth of the bottom again. The one side seems to have had more decreases than the other and pulls in toward the handle more severely.

I was a little concerned about the short handle going around my arm so I have "hung" it to dry. I'm sure it will take days and days with this humid and hot MN weather!

Lamb's Pride Worsted in M-160 Dynamite Blue from Denise's Brown Sheep shopping trip. I still have about 1/2 the skein!
Posted by Tracie at 8:34 PM No comments:

I was planning a relaxing weekend.... I wound up leaving the cabin with youngest son shortly after 4:00 on Saturday headed to the ER. He and his older brother were on the jet ski and flew off and he tried to plant his face in the front hood. He has a gash on his chin, a sore nose and neck and managed to ram his two front teeth about 1/8 inch up into the bone that separates the teeth and nose. Fun huh!

We got to the ER around 5:00.... they put him in a neck brace and did a CAT scan and XRays, then left there at 9:40 pm for the Oral Surgery Center where the oral surgeon agreed to come in and do surgery on him that night. (What a doc!) We got home just before 1:00 am.

He's now on heavy pain medication but no black eyes yet and the wire on his braces is again straight. His nose and upper lip aren't as swollen this morning so that's good.

He can't chew anything harder than cooked pasta for 6 weeks, preferably all liquids for the first few days. With the super glue on his chin for his gash there, no swimming or baths for 5-10 days until the glue is totally worn off.

The oral surgeon is going to call his dentist and orthodontist on Monday for further follow up by them. He will probably need a root canal in both front teeth due to the blood supply being cut off to those teeth. $$$ ARGH $$$
Posted by Tracie at 3:51 PM No comments: 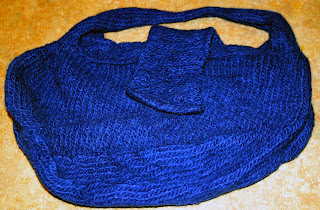 I have a front loading washer that locks and won't let you open the door until after the cycle is completely spun dry. In the past I have felted with Cascade 220 and Noro Kureyon yarn. Last night, I was washing blankets and towels from downstairs and thought I would throw the bag in for it's first run through the washer. It usually takes at least 3 times through.

Warning - Lamb's Pride Worsted is wonderful for felting! It came through the one wash cycle almost completey finished. However, it did felt to itself and get all creased in several areas. I've managed to pull it apart, but this next time I will need to use someone's top loader so I can check on it every 5 minutes. Another load through my washer I believe will be the end of it. I'll have a great creased felted sculpture.
Posted by Tracie at 11:10 AM No comments: 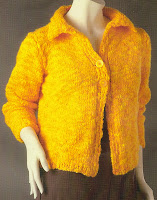 On Friday a friend and I took a little road trip at lunch and went to a LYS that is moving locations and having a sale. I found this pattern and the exact number of skeins of yarn I needed all for 75% off. I sure hope there aren't any surprises because there is no more yarn where this came from.

The yarn is Colourworks in yellows and oranges (shade 996), 100% Pure NZ Wool Hand Painted by Jan Gilray. I little brighter than I normally would pick but I thought it looked fun. They recommended alternating between 2 skeins every 2 rows to keep the color consistent so that's what I'm doing. So far I haven't had too many tangles. I have 10 inches of the back done after working on it this weekend. When I get to 13.5 inches I need to start decreasing for the arms.
Posted by Tracie at 8:52 PM No comments:

Last Saturday I drove 7 hours, round trip, for a wedding shower for my cousin. Mom, Grandma, my niece and my Aunt (Mother of the Bride) were all in the car so it was a great chance to catch up and have some time away. I cast on this cute little felted purse soon after leaving my house, and had all but the button flap done when I arrived back home. I finished the button flap one day last week and found a button at the LYS on Friday. Now.... to find the chance to go see if Mom will let me felt it in her top loading washer.

The yarn is the gorgeous royal blue Lamb's Pride from Denise's shopping trip for me (1.5 skeins). The pattern is by Amanda Berka and is available from Knitting Daily by Interweave Press.

The original bag is suppose to be 4.5 inches high, 10 inches long and 2 inches wide with a 14 inch handle. I made the bag bottom twice as many stitches wide so I'm hoping it's more like 4 inches wide.
Posted by Tracie at 8:31 PM No comments:
Newer Posts Older Posts Home
Subscribe to: Posts (Atom)